The global substance abuse treatment market could expect significant growth at the rate of 11.6% during the forecast period (2018-2023), suggests Market Research Future. Few crucial factors backing the market growth include the rising number of addicted people, rising number of drug awareness campaigns and prevention programs, and technological innovations in the diagnostics industry

Substance abuse refers to the harmful use of psychoactive substance, including alcohol and illicit drugs. Increase trends of cigarette smoking in teenages is one of the prominent factors driving the substance abuse treatment market according to the 2019 study in the clinical and translational investigation journal, More than 60% of individuals start smoking at the age of 13 and more than 90% individual start smoking before reaching 20 years. It is also reported that 5.8% of the Mexican population comprise adolescents between 13 and 15 years. Of them 42.8% tried a cigarette at some point in their life.

Addiction is growing concerns across the globe. According to the 2019 National survey on drug use and health 15.1 million adults aged 18 year and above had alcohol use disorder, which included nearly 9.8 million men. About 1.3 million adults received treatment for AUD at a specialized facility in 2019. Over 16 million people in the U.S. are living with a disease caused by smoking. According to CDC survey, tobacco use caused nearly 6 million deaths globally each year. Current trends indicate that tobacco use is likely to cause more than 8 million death annually by 2030. Drug abuse treatment providers and manufacturers of treatment products are focusing on raising awareness among people and drug store owners about adverse effects of drug abuse and importance of abuse and alcohol abusers and use of drug abuse testing to law enforcement agencies

Annual prevalence of drug use in England and Wales, fiscal year 2018–19 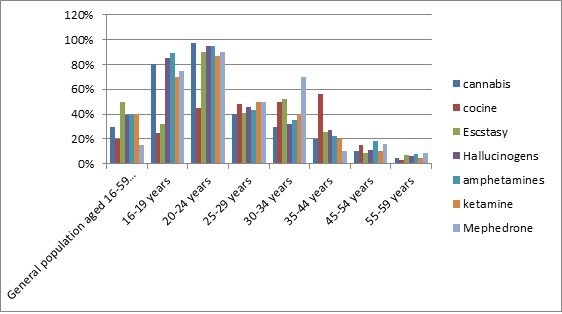 This statistic shows the estimated percentage of the global population that have used illicit drugs in the past year to 2019, by drug type. During this year, a low estimate of 0.96 percent of the world's population use drugs 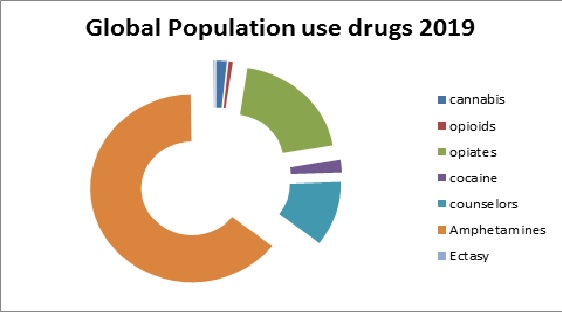 North America accounted for a substantial share of the global cardiovascular drugs market in 2019. This is due to rise in the number of smokers in the U.S has increased concerns regarding health risks for both smokers and passive smokers. The market in Asia Pacific is projected to gain market share during the forecast period and is likely to generate considerable revenue in the near future. Initiatives by local governments to attain self-sufficiency in manufacturing pharmaceuticals and incentives for the production of generics in countries such as Brazil, South Africa, and Saudi Arabia are likely to boost the market in Latin America and Middle East &Africa

Importance & Scope: Drug consumption all over the world has become one of the biggest concerns of our country right now since it is affecting the youth and the children . In a report submitted by the National Drug Dependence Treatment Centre (NDDTC) of the All India Institute of Medical Sciences (AIIMS) in February 2019, it was found that about 14.6 percent of the people (approx. 16 crore people) between the ages 10 and 75 are alcohol user and about 2.8 percent (approx. 3.1 crore people) use cannabis products. According to a report by The First Post, there are about 8.5 lakh people who inject drugs, nationally. These stats are really horrifying because drug use all over the world has gone up rapidly in the past few years. USA, France, Italy U.K are countries of the states that have a high prevalence of drug abuse and disorders, according to reports.

Re habitation centers Rehabilitation involves identification of a person’s problems and needs, relating the problems to relevant factors of the person and the environment, defining rehabilitation goals, planning and implementing the measures, and assessing the effects (see figure below). Educating people with disabilities is essential for developing knowledge and skills for self-help, care, management, and decision-making. People with disabilities and their families experience better health and functioning when they are partners in rehabilitation Rehabilitation reduces the impact of a broad range of health conditions. Typically rehabilitation occurs for a specific period of time, but can involve single or multiple interventions delivered by an individual or a team of rehabilitation workers, and can be needed from the acute or initial phase immediately following recognition of a health condition through to post-acute and maintenance phases

Scope of Addiction Rehab the Scope of Practice Statement identifies knowledge and skills required for the provision of effective rehabilitation counseling services to persons with physical, mental, developmental, cognitive, and emotional disabilities as embodied in the standards of the profession's credentialing organizations

Center of Detoxification and Recovery from Drugs and Alcohol

Directory of National Associations of Psychology

National Board of Italian Psychologists code of Ethics