Cancer is an abnormal growth of cells that tend to proliferate in an uncontrolled way, and in some cases, to metastasize/spread. Cancer is not a single or one disease but It is a group different and distinctive diseases. In all types of cancer, some of the body’s cells begin to divide without stopping and spread into surrounding tissues, genetically which are called Oncogenes. Cancer can start almost anywhere in the human body, that are made up of trillions of cells. As the cancer is spreading in the world very rapidly so many market studies and researches are going on and still so many are under study. 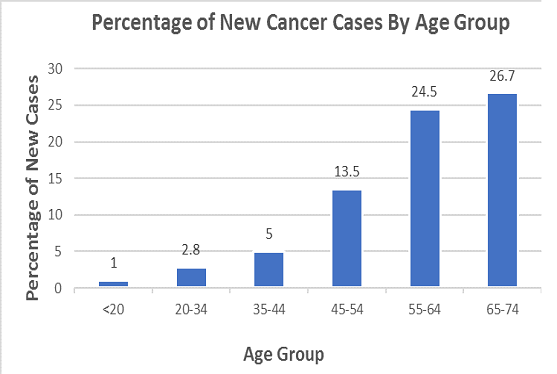 North America is known as the leading regional market for cancer diagnostics and research. In terms of income in 2015, a part of approximately 40.7% of the general cancer diagnostics market raised, followed by Europe which accounted for around 29.1% share in the cancer market.

As per the facts stated in some studies, In the 1980s, the cancer survival rate was less than 50%. Today, almost 7 in 10 Australians will survive for at least 5 years after a cancer diagnosis, and in some cancers the survival rate is as high as 90%. Around 25,000 or more people die each year from cancer compared to 1982 studies. This is mainly due to the population growth and ageing. As per some studies in 2008, it was estimated that, every year more than or around 434,000 people will be diagnosed with one or more non-melanoma skin cancer in Australia. In 2014 research showed that, cancer was the second most common cause of death in Australia, and accounted for 3 in 10 deaths. In 2016 - 2018, $252 million in funding was provided for cancer research projects and programs in Australia for the researches to find clues why only in Australia the death cause is Cancer. In 2016, around 679 people died from non-melanoma skin cancer in Australia. As cancer is a leading cause of death in Australia, almost 50,000 deaths from cancer are estimated for 2019. Moreover, 1 in 2 Australian men and women will be diagnosed with cancer by the age 85. An estimated 145,000 new cases of cancer will be diagnosed in Australia in the year 2019, with that the number is set to rise to 150,000 by 2020. From 1982 to 2019, thyroid cancer and liver cancer death/ patient rates increased more than any other cancer in Australia. In 2019 studies show that, an average of 396 new cases of cancer will be diagnosed each day and an average of 136 people will die out of cancer every day in Australia. In 2019 an estimated study says, followed by prostate cancer, breast cancer will be the most commonly diagnosed cancer in Australia.

After studying these market researches, Conference Series has come up to discuss briefly about the cancer, oncology and its treatment. Asia Pacific Oncologists 2020 that is scheduled to be held at Brisbane, Australia during November 16-17, 2020 and will be the best platform for all the scientists, radiologists, oncologists, research scholars, students in this field to exchange their knowledge related to cancer, oncology and relevant treatments and diagnosis. This international event will put an effort to find an alternative for invasive imaging technique against cancer like Liver Cancer, Breast Cancer, Lung Cancer, Kidney Cancer, and Cancer in adults and in children.