According to latest report, Prospects for Space Exploration, global government investment in space exploration totaled $14.6 billion in 2017, a 6% increase compared to 2016. Fifteen leading space programs worldwide are estimated to contribute to this global investment, with the U.S. accounting for 74% of the total. Global expenditures have grown in the past five years driven by programs in leading countries and new countries investing in space exploration. In a still constrained budgetary environment, global space budgets for space exploration are expected to grow to over $20 billion by 2027.

At $7.7 billion in 2017, transportation is the largest expenditure area; it is forecasted to reach nearly $9 billion in 2027 supported by significant investments from multiple countries and particularly in the U.S. and China to support the development of next generation crew and/or cargo vehicles for LEO and beyond-LEO activities. 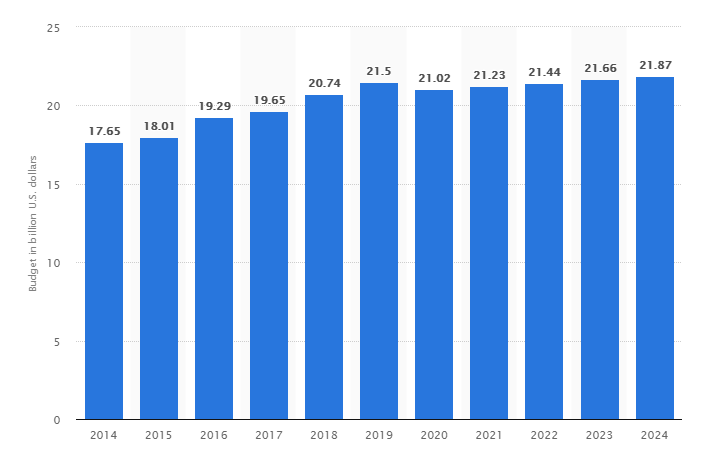 Orbital Infrastructure is the second-largest application with $3.5 billion in 2017, an investment which has been stable over the past five years. Funding should continue to grow, driven by investments in the ISS program and increasing funding for the development of the Lunar Orbital Platform-Gateway by ISS partners as well as China’s investment in its space station.

Moon exploration, which has received modest investment in the past five years, should experience sustained growth, reaching $2.8 billion by 2027 to support ambitious government missions and commercial partnership programs as Moon exploration becomes a central item in the exploration strategy of most agencies moving forward.

Mars exploration budgets grew to $1.5 billion in 2017; investment is expected to peak in 2018 as four missions are set for launch in 2020. After a cyclical downturn, new investment cycles to support planned missions might increase funding again to reach $1.3 billion in 2027.

Other deep space exploration programs reached $1.4 billion in 2017; global funding should reach $1.8 billion by 2021 to support the development of multiple planned missions in the middle and end of the decade.

Over the past ten years, 19 planetary exploration missions were launched by six countries/agencies (the U.S., ESA, Russia, Japan, China, and India). Over the next decade nearly 80 missions are expected to be launched, of which 63% will correspond to government missions. The next decade will also see the rise of commercial exploration initiatives, with close to 30 commercial missions forecasted by 2027, primarily driven by lunar initiatives. In terms of application, Moon exploration is expected to account for the majority of missions (64% of the total) to be launched by 2027, as lunar exploration becomes the focus in the strategy of private and public stakeholders. A total of 18 missions are anticipated to be launched for other deep space exploration, while the remaining missions will be dedicated to Mars exploration.

On this well suited event, Conference Series welcomes the members from everywhere throughout the globe to partake in the 4th International Conference on Astronomy and Space Technology during May 20-21, 2020.

Astronomy 2020 is trending under the theme “Astronomy and Space Technology in the time of Covid-19” which brings together leading scientists, professors, engineers, researchers, scholars, students and market leaders from all areas of Physics, Chemistry, Mathematics, Computer Science, Geology and Biology etc.