In England as a whole, childhood obesity is growing and is a major issue facing London. Data for 2009/10 indicates that 11.6% of kids aged 4-5 and 21.8% of kids aged 10-11 were at danger of obesity in London. For both age groups, this is greater than the English average. The proportion believed to be at danger of being obese has remained comparatively static over the past three years for kids aged 4-5 in London. Among the age group of 10-11, the percentage of those at risk of being obese has increased slightly over the last three years. Boys are at greater risk of being obese than girls for both age groups. The prevalence of children at risk of obesity is highest in the most deprived areas and there is significant inequality across London. Children from certain ethnic minority groups such as Bangladeshi, Black Caribbean and Black African were found to be at a higher risk of obesity but analysis by the National Obesity Observatory suggests that ethnicity is not as strongly linked to obesity as deprivation because weight differences between ethnic groups may be linked to differences in body composition and other physical categories such as height. There are currently no projections at London level for child obesity. National projections based on data from the 1993-2004 Health Survey for England show that a quarter of young people under the age of 20 will be obese by 2050. Data from 1993-2007 suggest that there has been a positive shift in healthy weight levels among children over the last few years at the national level and this is reflected in the weight levels forecast for 2020. However, the increase in obesity that has already occurred should not be ignored, especially since it can take several decades to manifest the nature of obesity-related diseases such as diabetes and heart disease.

In the long run, London's overall cost of childhood obesity will be much higher than this because many of the treatment costs and effects of obesity (such as cardiovascular disease, diabetes, and some cancers) are unlikely to be incurred until later in life (i.e. not in childhood). This also applies to the wider indirect costs of sickness and premature death, such as loss of productivity; they will be incurred in later life, not in childhood

In summary, an obese child in London is likely to cost about £ 31 a year in direct costs that could rise to a total cost of £ 611 a year (direct and indirect) if they continue to be obese in adulthood.

Childhood obesity is a major public health problem worldwide, with the potential to hinder progress towards the SDGs. The only feasible option to combat the crisis is to consider prevention. Unhealthy diets, malnutrition and sedentary lifestyles are major causes of obesity in children.

Obesity in children is not limited to Europe–it is a global phenomenon. Ending Childhood Obesity urged measures to promote healthy food intake and physical activity, concentrating on early years and environments for children. An estimated 49 million children under 5 years of age were overweight or obese in 2019; almost three-quarters of these children live in Asia and Africa. Preventive measures for obesity must be essential to any effort to stop the worldwide double burden of malnutrition. As such, COSI's country expertise–in producing information and helping countries plan, enforce and review policies–is an important asset for international sharing. 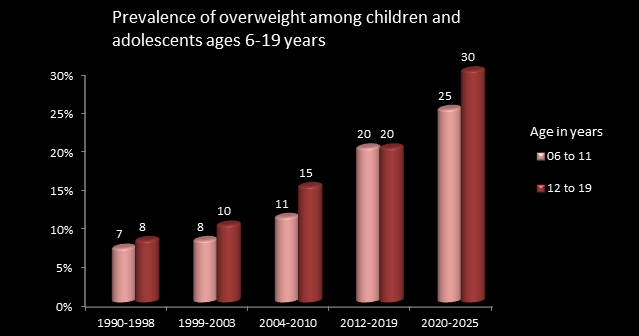 It is predicted that evolving habits and the growing popularity of junk food will lead to an increase in childhood obesity over the next decade. Particular prevalence is expected in developing countries where conventional diets are becoming westernized and starch, sugar, oil and fat consumption rates are increasing. According to the Atlas of Childhood Obesity of the World Obesity Federation, which estimates that by 2030 250 million children and adolescents will be obese.

For the estimated 158 million children and adolescents classified as obese, this is definitely a significant rise. It is anticipated that China (62 million), India (27 million) and the United States (17 million) will have the highest number of obese children worldwide in absolute terms by 2030, while smaller countries will be at greater risk. Why in London, UK?

London is one of the leading global city. It is the world's leading financial centre alongthe side of New York, and is home to the head office of more than 100 of Europe's with 500 largest companies. It has the most universal visitors of any city in the world.

The history of London’s great hospitals starts with medieval monastic charity. St. Bartholomew’s  was founded in 1123 and St. Thomas’s at Lambeth about 1213. The other main hospitals including St. George’s, Middlesex, Charing Cross, Royal Free and University College and King’s College date to the 18th or 19th century. As the country resisted to make national health care viable, scheme followed hard upon scheme. In the early 21st century, direct government control was removed, and National Health Service  foundation trusts were established to administer various mergers.

The Lord Mayor and City Corporation of London form one of the ancient local governments in the world, with a history of municipal autonomy covering in unbroken succession to the folkmoots of the early Middle Ages. The Square Mile remains an self-governing jurisdiction within its historic boundaries, with its own police force and a complete range of municipal amenities attending to the needs of its fairly small resident population and a hugely larger weekday working population. Through the centuries the City Corporation has accumulated massive resources of capital and property, rooting itself alongside its historic foes, the crown and the aristocracy, at the apex of Britain’s stratified society.