USA: By 2030, it is estimated that the US population of people age 65 and over will double, making up over 20% or about 70 million of the country’s population. As the baby boomers enter the geriatric population, this has the potential to enormously escalate the nation’s already high health care costs. The U.S. population is “graying” at a rapid rate. According to data published by the United Nations in 2014, it has been estimated that by the year 2022, approximately 35% of the population would be above 60 years of age.

Middle East:  The Middle East will develop rapidly aging populations within the next few decades. Many factors has resulted in increase in the elderly including improvement in living standards, the curbing of communicable disease, and the latest breakthroughs in medical science. The World Health Organization, estimates that from 2000 to 2050, the rate of growth of the population above age 65 is projected to be 4%–5%, and the average annual growth rate of the oldest old (85 years and older) will exceed 5% in eleven Arab countries.

Asia Pacific: The Asia-Pacific region is undergoing profound and rapid population changes. All countries in Asia and the Pacific are in the process of ageing at an unprecedented pace, although the timing and pace of this transition varies across the region. In 2016, approximately 12.4 per cent of the population in the region was 60 years or older, but this is projected to increase to more than a quarter or 1.3 billion people by 2050. By 2050, nearly 8 in 10 of the world’s older population will live in the less developed regions. This is especially pertinent for a region such as Asia and the Pacific.

The world’s older population continues to grow at an unprecedented rate. Today, 8.5 percent of people worldwide (617 million) are aged 65 and over. According to a new report this percentage is projected to jump to nearly 17 percent of the world’s population by 2050 (1.6 billion). Population ageing is poised to become one of the most significant social transformations of the twenty-first century, with implications for nearly all sectors of society, including labour and financial markets, the demand for goods and services, such as housing, transportation and social protection, as well as family structures and intergenerational ties. the number of older persons — those aged 60 years or over — is expected to more than double by 2050 and to more than triple by 2100, rising from 962 million globally in 2017 to 2.1 billion in 2050 and 3.1 billion in 2100. Globally, population aged 60 or over is growing faster than all younger age groups. In 2017, there are an estimated 962 million people aged 60 or over in the world, comprising 13 per cent of the global population. The population aged 60 or above is growing at a rate of about 3 per cent per year. Currently, Europe has the greatest percentage of population aged 60 or over (25 per cent). Rapid ageing will occur in other parts of the world as well, so that by 2050 all regions of the world except Africa will have nearly a quarter or more of their populations at ages 60 and above. The number of older persons in the world is projected to be 1.4 billion in 2030 and 2.1 billion in 2050, and could rise to 3.1 billion in 2100. 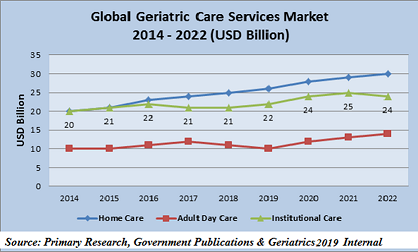 Andalusian society of Geriatrics and Gerontology

Valencian society of Geriatrics and Gerontology

Madrid society of Geriatrics and Gerontology

Czech Society of Gerontology and Geriatrics

Hungarian Association of Gerontology and Geriatrics

Portuguese Society of Geriatrics and Gerontology

French Society of Geriatrics and Gerontology

Italian Society of Gerontology and Geriatrics

Universities Associated with Geriatrics around the Globe:

The University of Edinburgh 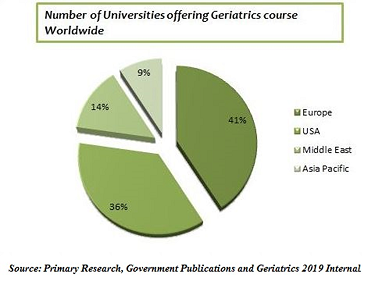