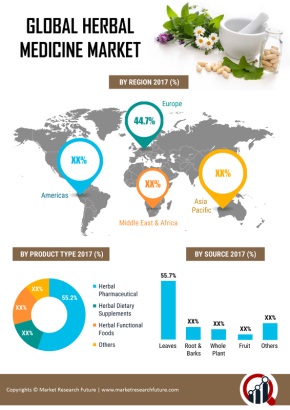 Herbal medicines are used since ancient times for numerous health conditions. It is the oldest and most extensively used system of medicine in the world today. There are various kinds of herbal medicines and supplements used across the world. According to the National Center for Biotechnology Information, 2015, the World Health Organization (WTO), reported that around 70% to 80% of people globally rely on herbal sources for their treatment. Also, according to the American Botanical Council, September 2017, it was reported that in 2016, the sale of herbal supplements increased by 7.7% in the US. It was also estimated that consumers spending on herbal supplements increased to USD 7.452 billion in 2016. Thus, the increase in the demand for herbal products for healthcare purposes is likely to enhance this market during the forecast period.

The prominent players in the global herbal medicine market are:

Some of the key strategies followed by the players operating in the global herbal medicine market were innovation, product development, acquisition, and expansion.

Marrubium vulgare segment is the fastest-growing segment of the market at CAGR of 6.45% during the forecast period. Marrubium vulgare also known as white horehound is a largely cultivated plant, and its above-ground parts are used for medicinal use. The upper part of the plant is used in powder, liquid extract, or juice form for medicinal purposes. Marrubium vulgare is largely used for digestion problems which include indigestion, loss of appetite, gas, bloating, diarrhea, constipation, and gallbladder complaints. It is also used for the treatment of breathing problems.

Canada: In addition to rising health-consciousness among Canadians generally, growth in the number of immigrants from countries with strong herbal medicine cultures will remain a key driver of demand for herbal/traditional products over the forecast period. The 2016 census put the proportion of Canadians who are immigrants at 22%, the highest level in 85 years, and Statistics Canada expects this figure to rise to 30% by 2036.

USA: Americas accounts for the second largest share in the global herbal medicine market. It accounted for a considerable market share of 16.2% as of 2017. The use of herbal medicines is also growing in the US after conducting the first national study of alternative and complementary medicines used by Eisenberg et al. According to the National Center for Biotechnology Information 2017, it was reported that herbal supplements were majorly used for conditions such as cancer (43.1%), stroke (48.7%), and arthritis (43%) in the US. Such a high demand and preference for herbal products is likely to boost the market growth during the forecast period.

Europe: Europe is expected to account for the largest market share owing to extensive R&D for herbal medicine, increasing funding for research on medicinal plants, and growing preference for herbal drugs globally. On a regional basis, Europe is segmented into Western Europe and Eastern Europe. Western Europe is estimated to lead market growth during the forecast period. The increasing prevalence of chronic diseases and rising government support facilitate market growth within the region.

Asia Pacific: Asia-Pacific is expected to register a CAGR of 5.99% during the forecast period owing to the adoption of traditional medicines by pharmaceutical companies, researchers, and policymakers. On the other hand, the Middle East and Africa are expected to observe a slow growth due to less awareness and in-depth knowledge about herbal drugs in this region.

Plants have been used for medicinal purposes long before prehistoric period. Ancient Unani manuscripts Egyptian papyrus and Chinese writings described the use of herbs.  Evidence exist that Unani Hakims, Indian Vaids and European and Mediterranean cultures were using herbs for over 4000 years as medicine. Indigenous cultures such as Rome, Egypt, Iran, Africa and America used herbs in their healing rituals, while other developed traditional medical systems such as Unani, Ayurveda and Chinese Medicine in which herbal therapies were used systematically. Recently, WHO (World Health Organization) estimated that 80 percent of people worldwide rely on herbal medicines for some aspect of their primary health care needs. According to WHO, around 21,000 plant species have the potential for being used as medicinal plants.

As per data available over three-quarters of the world population relies mainly on plants and plant extracts for their health care needs. More than 30% of the entire plant species, at one time or other were used for medicinal purposes. It has been estimated, that in developed countries such as United States, plant drugs constitute as much as 25% of the total drugs, while in fast developing countries such as India and China, the contribution is as much as 80%. Thus, the economic importance of medicinal plants is much more to countries such as India than to rest of the world. These countries provide two third of the plants used in modern system of medicine and the health care system of rural population depend on indigenous systems of medicine.

Major Herbal Associations around the Globe

Herbal Conferences 2020 is the best platform with its well organized scientific program to the audience which includes Symposiums, Workshops, Keynote Lectures, Plenary Talks, Panel Discussions and Poster Sessions on the latest research and technological developments in the arena as well as therapeutic aspects. The conference invites Herbalists, Acupuncturists, Natural healers, Researchers, Students, Young researchers and Business delegates across the globe.