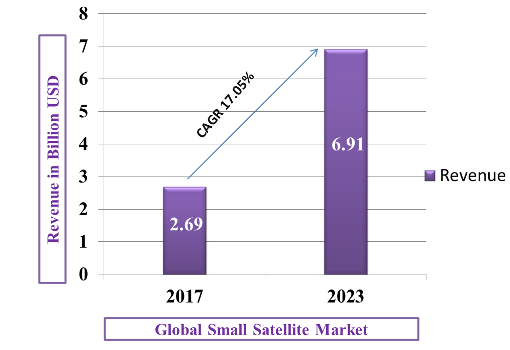 The satellite communication equipment market is predicted to expand with a compound annual growth rate (CAGR) of 8.88% throughout the forecast period to cross US$ 47 billion by 2026. Satellite communication equipment market is set to demonstrate promising growth over the forecast period, majorly due to significantly growing IT & telecommunication sector worldwide. The global telecommunication traffic accounted to cross 290 terabits per second in 2017 along with addition of new 196 terabits per second of international Internet capacity between 2013 and 2017.

The prominent players in the Global Small Satellite Market are:

Key players are adopting numerous strategies such as product launch, acquisition, collaboration, partnership, product development, agreement, and business expansion, to stay competitive in the small satellite market. For instance, on August 5, 2019, SpaceX is projected to begin a new SmallSat rideshare program in the coming two years, providing a launch mass of 150 Kg for $2.25 million per mission.

The global satellite market is currently being driven by numerous factors such as the rapid development and deployment of low-cost satellites, increasing demand for location-based services, adoption of commercial satellite imaging, hyper spectral image processing for automatic target detection across industries, and demand for digital communication.

Numerous major segments with the satellite industry are contributing to the market's overall revenue growth. For instance, by satellite type, both the nano and microsatellite segments are expected to witness rapid growth over the next few years. Technavio's research forecasts the global nano and microsatellite market to grow at a CAGR of almost 23% during the forecast period by 2020, owing to growing demand in commercial applications, their increasing use in military and defense applications, and its cost-effectiveness as compared to bigger satellites. 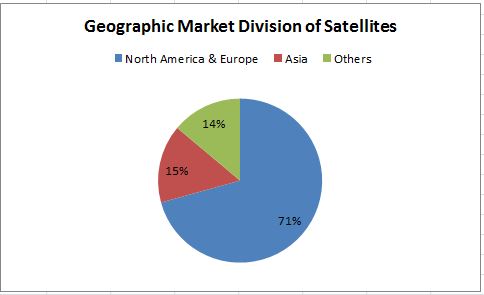 North America: Currently, North America has the highest market share in the spacecraft market, mainly due to high space budget by NASA. Additionally, many companies in the United States, like The Boeing Company, Lockheed Martin Corporation, and SpaceX are making huge investments in spacecraft technologies. In March 2018, NASA was given a grant of as much as USD 20.74 billion for the fiscal year 2018 by the US Government. With investments and government spending amounting to sums as much as this, North America is expected to continue its dominance in the spacecraft market during the forecast period.

Europe: This market research report segments the satellite-based earth observation market in Europe by type (data and VAS) and geographical regions (Russian Federation, UK, and Rest of Europe). The VAS segment held the largest market share in 2018, accounting for over 59% of the market. This type segment is expected to dominate the global market throughout the forecast period. Russian Federation led the market in 2018 with a market share of over 44%. This region is expected to dominate the market through 2023, followed by the rest of Europe and the UK respectively.

Not many people are aware of the fact that a major part of the day-to-day communication happens through the satellite and not ground cables. There was a time when ground cabling carried a vast portion of communication, but today it is assisted by new satellites, especially geostationary models, helping almost continuous and total global coverage. This almost incessant global coverage assists in the realization of a lot of remote healthcare services, like remote health monitoring, emergency communication, assistance in search or rescue operations, and very recently trend is extended to tele-diagnosis. These along with several other associated services can now be implemented at almost any under-services or remote location on the Earth. This would have been impossible without satellite communications.

Major Satellite Associations around the Globe

Satellite 2020  provides a platform for researcher scholars, scientists and academicians to share and globalize their research work while the participants from industry or business sectors can promote their products thus facilitating dissemination of knowledge. We anticipate more number of participants around the globe with thought provoking keynote lectures, oral and poster presentations. It is an outstanding platform to interact with the respective eminence to exchange views and share the knowledge under a single roof.