The importance of matching international standards of quality across industries such as pharmaceutical as well as food and agriculture industries which includes rising adoption of the process technology is promoting the growth of spectroscopy market. The growth forecast is expected to grow at a CAGR of 8.4% during the period from 2017 to 2025. The world process spectroscopy market is anticipated to reach USD 2005.2 million in 2025. 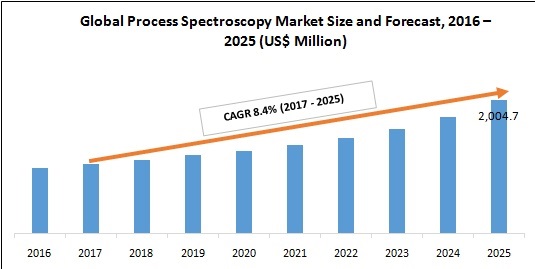 Due to the presence of several global and regional vendors, the spectroscopy market appears to be fragmented. The competition among the companies is mainly focussed on factors such as production volume, quality, innovation in technology, and aftersales services. The major challenges to spectroscopy manufacturers are consumer preferences, rapid improvements in technology and, intense competition among them. Companies are concentrating on developing products with innovative technologies and are highly focussing on improving revenue.

The chemicals market expected to reach a value of nearly $4216.55 billion by 2022, significantly growing at a CAGR of 5.4% during the forecast period. The growth in the chemicals market is due emerging markets growth, low oil prices and emergence of multinational chemicals companies.

Sulfuric acid is one of the largest-volume industrial chemicals produced in the world. The production of fertilizers, especially phosphate fertilizers from wet-process phosphoric acid, is the major end-use market for sulfuric acid, accounting for over 60% of total world consumption in 2017. Major growth drivers on a global level in decreasing order are use for phosphoric acid, titanium dioxide, hydrofluoric acid, ammonium sulfate, and for uranium processing and metallurgical applications.

The majority of sulfuric acid is generated by burning sulfur smelter acid is involuntarily produced and its economics are driven primarily by metal markets. Increased recovery of by-product sulfuric acid at smelters has had a significant impact on the industry, leading to increased trade in sulfuric acid (since by-product producers are not necessarily located near acid markets) and forcing some sulfur-burning plants to close.

Industrial uses will decline slightly through 2022. Future growth in sulfuric acid consumption will be driven by increases in population and the extent to which people in the developing world switch to increased nutrition-rich food crops that require significant quantities of fertilizers. It will also be influenced by the rate of increase in production of biofuels, especially corn-based fuels. Conference Series is a renowned organization that organizes highly notable conferences throughout the globe. Currently we are bringing forth “11th World Congress on Chemistry” (World Chemistry 2020) scheduled to be held during September 21-22, 2020 at Rome, Italy. The conference invites all the participants across the globe to attend and share their insights and convey recent developments in the field of Chemistry.